Pilar: Ben!  Tell us about what you’ve been up to!
Well, after we opened Terra Incognita at Annex this summer, I moved to Minneapolis for a one-year residency at the Playwrights’ Center as a Many Voices Fellow.  I’ve been writing a lot.  Full time.  So I completed the first draft of a play that I started in June when I did a bake-off with Paula Vogel.  I’ve also been working on total rewrites of both las mariposas Y los muertos and a play formerly known as TRUMP’D.  Most recently, I was flown to New York to workshop my play at the very bottom of a body of water at The Lark.  Out of 1200 submissions, it was 1 of only 6 plays selected; the experience was incredible.  Then I flew back to MN for a Fellows showcase as part of PlayLabs at the PWC.  And now, here I am, to workshop this Forward Flux commission!

Pilar: So where did this play come from?
Well, I remember in my first playwriting class ever (years and years ago), my teacher Susan asked if I had to write a play about a famous individual who would it be.  I said Karen O of the Yeah Yeah Yeahs.  So I’ve wanted to write a play about a female rock star for a while, but I had no idea what the actual plot would be.  But when Wesley said that he was looking to commission a play about “death and dying in the digital age.”  I thought about it and approached him with a pitch.  I started with my characters who were a trio that each played a different instrument.  Then when I wove in the idea of “death and dying in the digital age” – that was the fianl ingredient that made me think I had enough to get this play cooking.

Wesley: Talk about the evolution of the project from “death and dying in the digital age” to what it is now. How did the story change over time and how does the current incarnation of the play answer the original question?
The play has changed dramatically over the course of the last year.  Specifically, in terms of the play’s form.  For the most part, the characters and relationships have been the only constant. I addressed the subject of death through a comparison of Halloween and Dia de los Muertos.  I’m fascinated how we approach the subject of death in American culture — which mostly is that we don’t talk about it.  With Dia de los Muertos, the deceased are truly the focus but with Halloween it feels like every superficial aspect (like pumpkin carving, trick-or-treating, costumes, and getting drunk) ultimately gets more emphasis than death itself.  The first draft of the play had these social media-oriented interludes and when I wrote the controversial song in the play, my playwriting mentor Rebecca Tourino was like, “I think what you really want to write about is cultural appropriation.”  I got crazy writer’s block as I grappled with how I would do that.  But her comment was so astute, because she challenged me tell a much more personal and difficult story than I intended.  Since then, the interludes have fallen away and the Halloween/Dia de los Muertos aspect has been reduced to merely a reference in the play.  So while the initial prompt is still present in the latest incarnation, I think the play has ended up addressing the idea of legacy rather than death itself.

Pilar: Without any spoilers, can you tell us about this play?
The play’s dramatic action follows a band called Las Mariposas that consists of two sisters (Elena and Celestina) as well as their friend (Molly).  We watch the band from their genesis and as they develop their signature sound that leads to a steady rise in followers.  But as they gain more popularity, the characters begin to divide over what artistic compromises feel disingenuous or like exploitation.  Cultural appropriation as a theme is definitely woven through the story but, really, the conflict revolves around identity and image: how these women see themselves and how they want to be seen.

Wesley: What is writing on commission like vs. starting from your own idea on your own timeline?
For me, this particular experience felt like a collaboration from the get go.  When I’m writing my own idea, there’s not really a sense that I need to explain my ideas or please anyone with the story that I’m telling – I just write whatever I want, however I want.  But with this, I was thinking about what the Forward Flux brand is and how do I write a story that is mine but also addresses the type of story that serves the company’s needs.  A lot of times with plays, I start with images but, this time, I actually started with a storyboard.  That plotting made the trajectory of the story and the ideas of the play seem clear, initially.  However, I ended up writing a play with so many ideas that it felt like three plays in one and all those ideas were competing for focus.  So I threw that play away and started over with a simpler story that had a more complicated form; but decided again to throw it away and start over.  It was a master class in rewriting.  Eventually, I landed on something that felt deeply personal that also had a lot of the initial essence I began with.  I know that I’m getting a lot closer to telling the story that I want that also speaks to the project I pitched to Forward Flux.

Wesley: Earlier this summer we had an internal reading of the play after a few back and forth sessions with feedback. How did that reading help dictate the future of the play, and how has it changed since your first time hearing it out loud?
In the last reading, the play had a structure that allowed it to wind back and forth through time.  It was interesting but, ultimately, a gimmick.  And, frankly, it was a mess.  But that’s part of the process.  So I threw that draft out and decided to tell the story linearly.  I decided not to hide behind any conceptual quirks or flashy stylization; my goal was to tell the story as straightforwardly and honestly as I could.  I only retained about 25% of the content from the previous draft.  Everything else is new.  And it’s so much more crisp and nuanced now!  There’s a greater sense of momentum and story is clearer than ever.  I think each draft has given me a greater sense of who these characters are.  With this most recent draft, their voices are the most vivid that they’ve ever been.

Wesley: How is this play different from your other body of work (if at all), and what are the reasons for those differences?
I think it’s so different from my other stuff!  For one, it’s intended to have music in it, ultimately.  Original music that I’m still looking for a collaborator to work on it with me.  So that was new conceptually.  But the play also represents a departure for me because it’s a linear structure told in multiple short scenes (like 25 of them).  Generally, my plays have long, 10-ish page (or longer) scenes so to write in a more vignette fashion was unusual.  But I love how each scene feels like it’s a snowball rolling down hill and gaining momentum and complexity.  And I don’t think I forced any of those differences – the play is all these things because that’s what it wanted to be.  It was an organic result.  When I did try to impose an artificial structure on this piece, the result was ineffective…a failure.  Also, a lot of my known work utilizes poetry and magic, which aren’t nearly as present here…well, maybe there’s a little.  But, mostly, the language is colloquial and lighter on the imagery.

Wesley: The play asks a lot of difficult questions about artistic legacy and cultural appropriation. Can you tell us a little about your thinking behind asking them?
Honestly, I can say this was one of the most difficult plays that I’ve had to write.  Some of the content makes me cringe.  I think I was trying to avoid these subjects because I was so scared of having to be vulnerable about my experiences with them.  Also, I’ve been thinking a lot about how to be responsible with the stories I tell as an artist.  And cultural appropriation ties into that with who is allowed to claim what as their own.  I really didn’t want the pressure of opening up only to have other people judge the work by saying, “Oh, that’s not the right answer” or “You can’t say that!”  But, at a certain point, I’ve realized that I can’t worry about that because I can’t and don’t speak for everyone.  I can only speak to my truth and ask the questions.  And by asking them myself, hopefully, the audience leaves grappling with those questions themselves.

Wesley: Were these questions already on your mind or did they come up during the process of writing this play?
I would say that those ideas were quietly haunting me but from the very back of my mind.  I was trying not to allow them to absorb my attention.  After all, our society is facing much greater problems that deserve attention…or at least that’s what I told myself.  But I love writing plays because I see it as an opportunity to take the things that are haunting me, or that I want to learn more about, and/or think deeply about my personal associations with the subject, then turn them into a story I can share.  Over the course of writing, I was able to access some memories and dormant feelings that were critical to understanding my own values around those ideas.  Consequently, I would say that those questions began speaking much more loudly over the course of writing the play.

Pilar: Leave us with a favorite line or thought…
I actually love Elena’s monologue that you posted last week.  So I’ll leave you with that.
ELENA: “it’s not even like someone was like
“hey, your brown skin makes you less than”
that never happened
it didn’t need to
because even when I was a kid
I already felt that way
I don’t know where that feeling came from
but it must just be like in the fabric
of American culture or something” 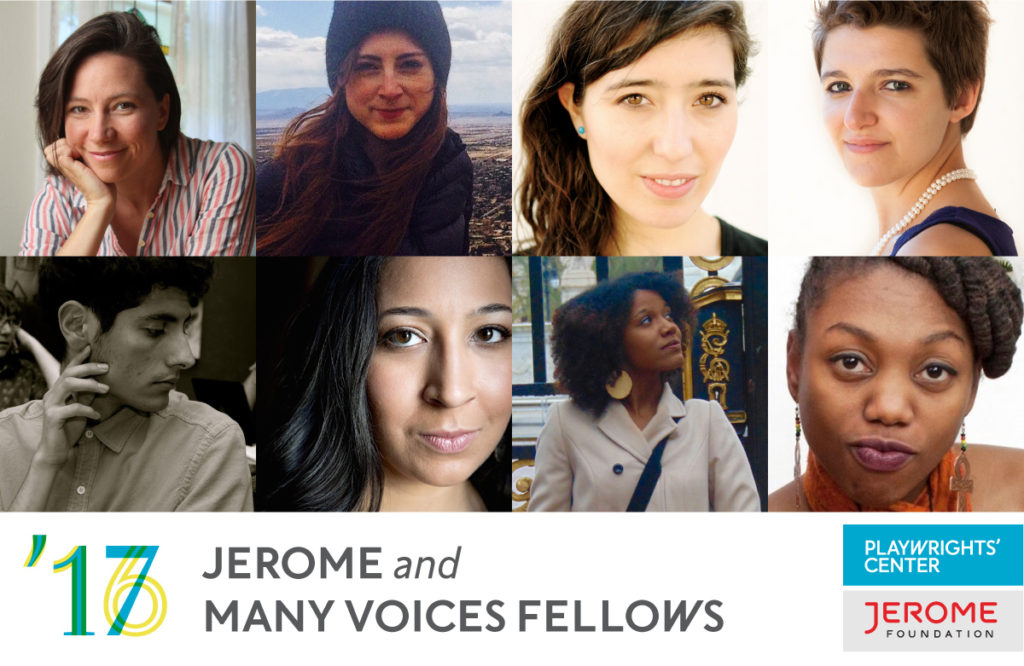 Benjamin Benne (bottom left) is currently in a year long residency at The Playwright’s Center in Minneapolis.

Benjamin Benne is a 2016-17 Playwrights' Center Many Voices Fellow. He is doing a one-year residency at the Playwrights' Center in Minneapolis, MN. Ben was also a finalist for the 2016 Princess Grace Playwriting Fellowship. He participated in a "Leda and the Swan" bake-off with Pulitzer Prize-winning playwright Paula Vogel as part of the Dramatists Guild Fund's Traveling Masters Program. Ben was also a participant in the New York Theatre Intensives 2011 summer conservatory (in association with EST/NY) and in the 2013 NoPassport Playwriting Intensive with OBIE Award-winning playwright Caridad Svich. His trilogy of mortality-themed plays (Terra Incognita, What / Washed Ashore / Astray, and at the very bottom of a body of water) each achieved semi-finalist status in the Eugene O'Neill Theater Center's National Playwrights Conference in consecutive years (2014, 2015, & 2016 respectively). at the very bottom of a body of water was also a 2016 Bay Area Playwrights Festival finalist and is currently in development with Umbrella Project. Terra Incognita had its world premiere (dir. Pilar O'Connell) at Annex Theatre (Summer 2016). www.benjaminbenne.com benjamin@forwardflux.com
Get Tickets