Chisa Hutchinson’s daring new play The Wedding Gift will open in Seattle on September 20th, 2016 and play until October 8th at Gay City Arts. This production from Forward Flux will be the second time ever that audiences can see this new play, after recently having its’ world premiere as part of the Contemporary American Theater Festival outside of DC. The Washington Post said the production is “a sci-fi parable about slavery with a bright future on the national theater scene. Daring.” We couldn’t agree more, and we can’t wait to share it with you this fall.

Chisa recently sat down with Sharon J. Anderson to talk about the play, her process, inventing a new language and what it means to be “other.” 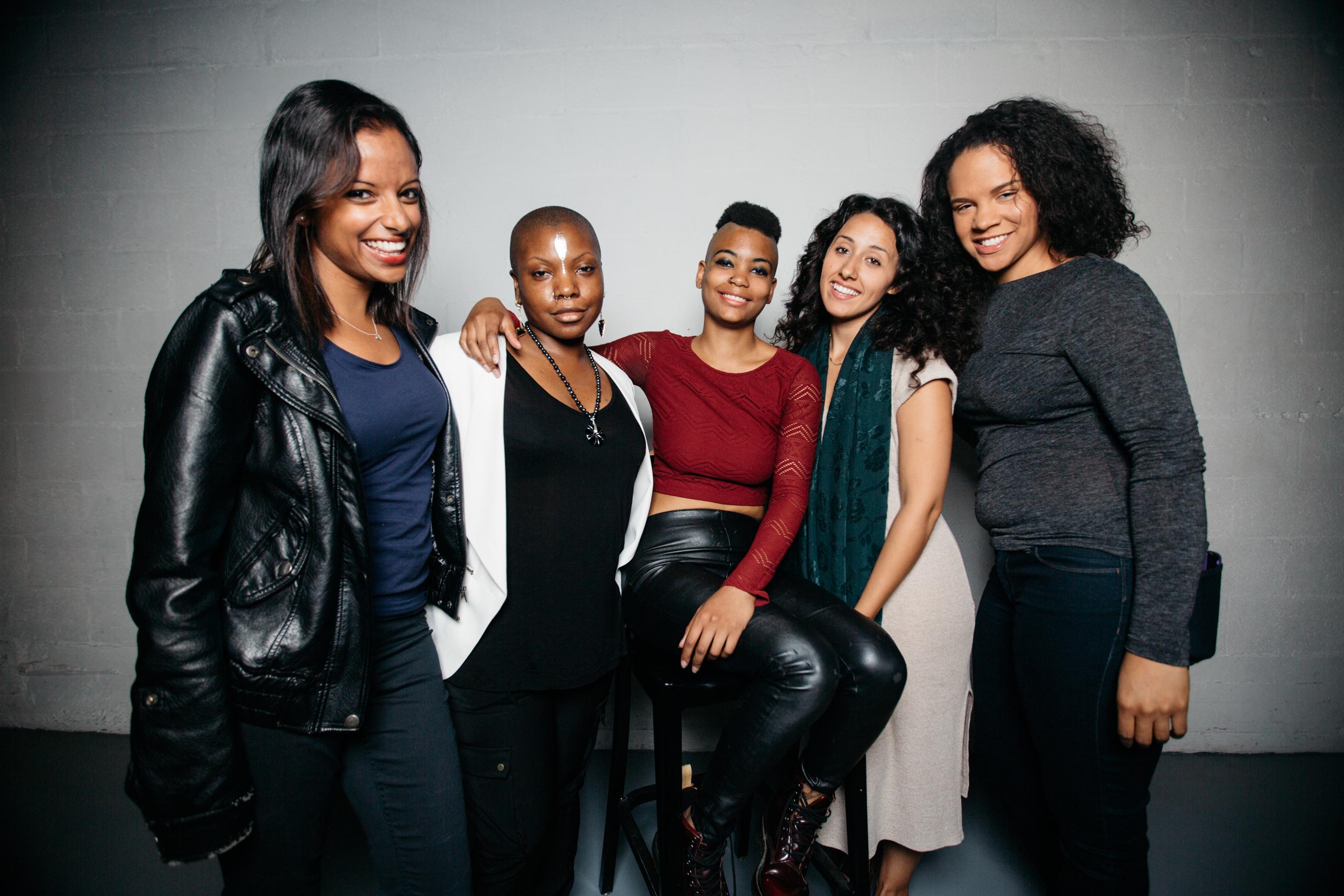 The ladies in the cast of The Wedding Gift. From L to R: Varsha Raghavan, Charhys Bailey, Nazlah Black, Haley Alaji, Marquicia Dominquez 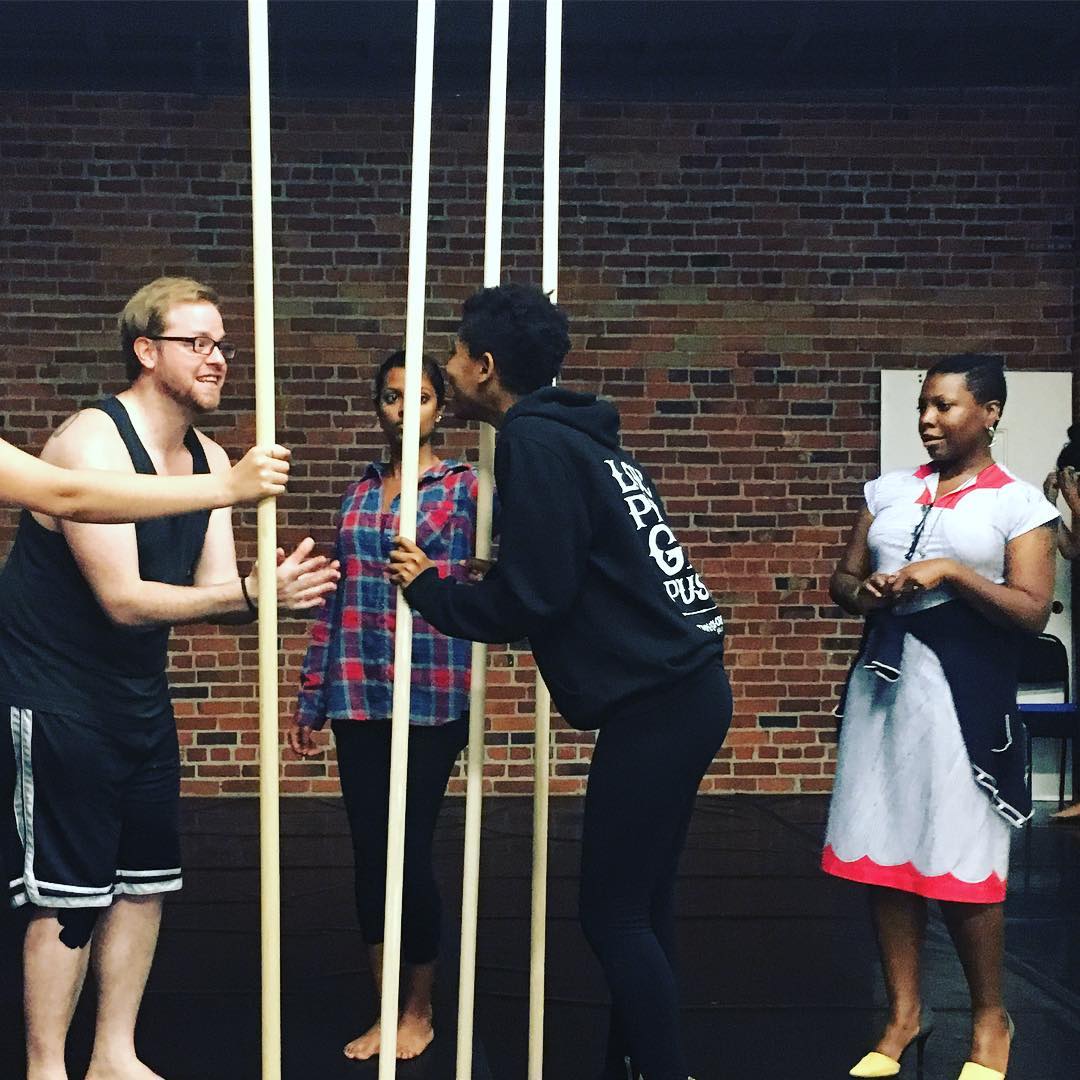 A scene from rehearsal. Doug (Andrew Shanks) pleads with the princess Nahlis (Nazlah Black) for his release while the Queen (Charhys Bailey) looks on. 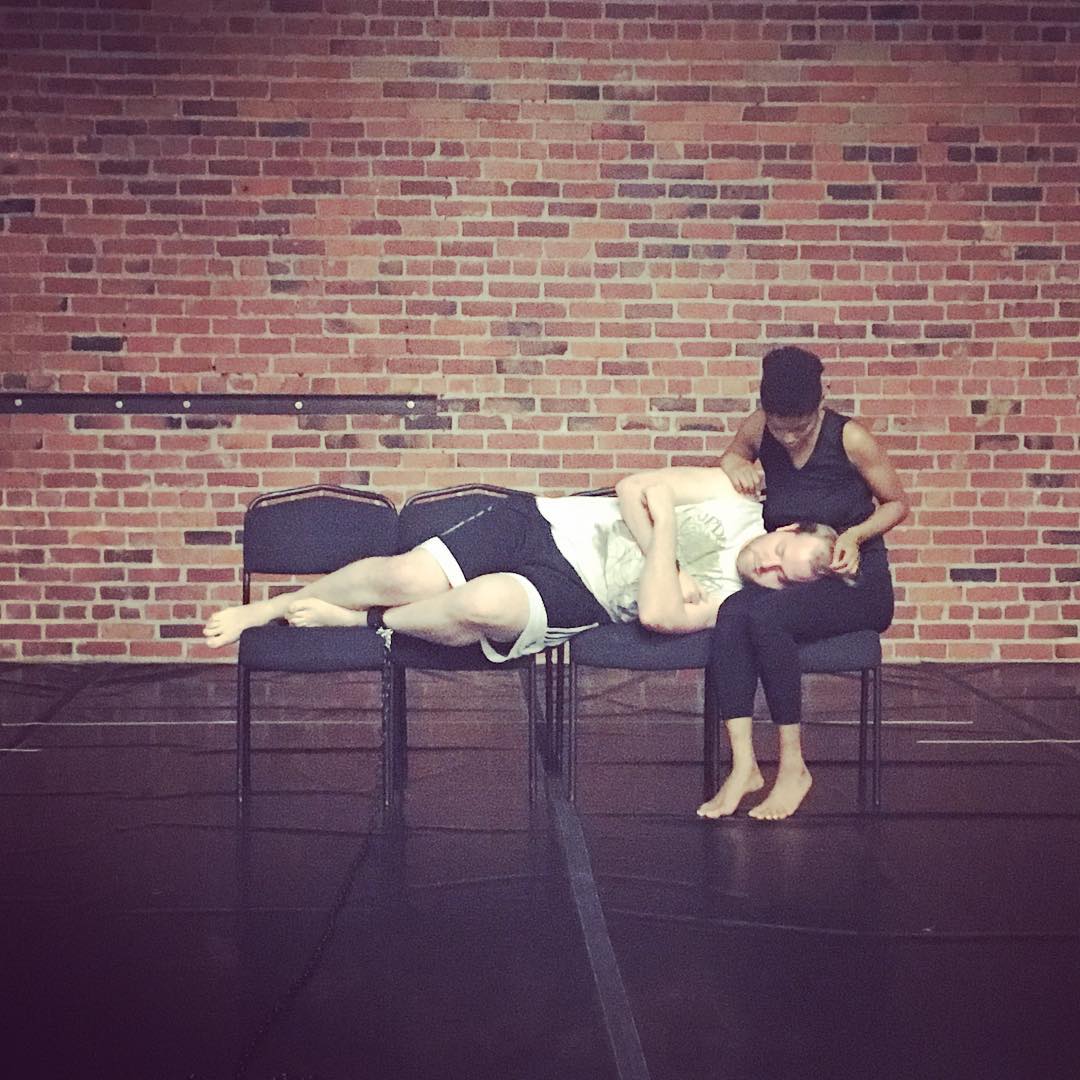 A scene from rehearsal. Doug (Andrew Shanks) gets cozy with Nahlis (Nazlah Black).

SA: Audiences are going to be challenged by The Wedding Gift for several reasons. One, it features full-frontal nudity. Two, the actors speak in a language you created, often without the benefit of a translator for about 30-40% of the play. That being said, the audience is facing an even deeper, more profound challenge.  How would you describe that challenge?
CH: The intention behind the language is to disorient the audience so it experiences a world that parallels the main male character – Doug.  Doug is human, but he’s treated like an animal, a pet, a male concubine, eunuch . . . he’s basically a slave. The challenge of the play is to be able to identify with the slave; to forge an empathetic connection with Doug.

SA: You say this play is about what it means to be “the other.”  It’s not just blacks among whites or whites among blacks, but also gays among straights, transgendered among males and females . . . even sick people around healthy people.  We all have to learn to speak a language that others don’t always understand. You would know that, of course, because of your multiple sclerosis.
CH: Absolutely, and I hope that audiences will be able to fill in the blanks for themselves, i.e., “This is the thing that makes me ‘the other.’”

SA: Are you concerned that some in the audience won’t get the heart of this message – empathy for the slave or “the other” because of the nudity?  Won’t some walk out of the theater saying, “Doug was naked,” instead of “I care for Doug?”
CH: Doug is not naked during the entire play.  It may become a little distracting, but in one scene it is totally necessary for Doug to be naked. I never use nudity in a gratuitous way. It’s all about the vulnerability of that character in that moment, that sense of exposure, that helplessness. Having someone naked standing in front of you is totally different from seeing someone totally naked on screen.  You are forced to think about the choice the writer made.  You have to grapple with it emotionally.

SA: Two years ago you said that you “wrote plays to make myself and others like me more visible.”
CH: When I wrote The Wedding Gift, I had in mind all these movies and plays that depict slavery in a hyper-literal way, i.e., “This is EXACTLY what it was like!  Here are the scars and here is the blood . . . look at it!”  That’s one way to come at it. But, ironically, I feel like it’s desensitizing and distancing. It makes it very safe for folks to respond, “Oh look how horribly they were treated so, so long ago.  Isn’t it great that we don’t do that anymore?”
Black people are still chained today.  Look at all the police brutality. I recently wrote a short play that was intended to be a reading of the names of women fatally brutalized by police, or women who had mysteriously died in police custody. After extensive research, the list turned out to be all women of color.  I thought, “Wow, that’s telling. You cannot be in your skin without being targeted. Your skin makes you a bulls-eye; a magnet for that kind of violence.”  It’s really hard to be confronted with the fact that my own skin is a prison.

SA: At one point in the play, Doug says, “You consider me an animal, something less than you, but I’m supposed to trust you with my life?”
CH:  I’ve definitely been in that position, maybe not with the police, but definitely with doctors. Recently, I had a horrible reaction to some MS medication. I had palpitations and trouble breathing and was drifting in and out of consciousness because I couldn’t get oxygen. My face went numb, my hands went numb . . . I actually had to be carried into the ER. The nurse in the emergency room said out loud – she probably thought I couldn’t hear her – “Ehhck . . . drama queen junkies.”  I wanted to say, “Hey, I can hear you.” This person was supposed to be saving my life, but was making a quick judgment about whether or not my life was worth saving.  You trust your doctors, you trust police officers, you trust firemen, you trust teachers – these positions come with inherent trustworthiness. When you see someone you’re supposed to trust thinking, “that doesn’t apply to me,” it’s sobering, it’s discouraging, to put it kindly. It’s infuriating.
That’s where the character Doug is in my play.  He’s confronted with this reality, “I’m really helpless here. I have no power here.”

SA: So The Wedding Gift is also about power and the fact that none of us can really control anything?
CH: For Doug and for a lot of us, especially brown folks, it would be enough just to be in control of our own bodies; to not have our bodies policed or tampered with. It would just be enough to be in control of our own personal situations, to have some agency, if nothing else.  I don’t need power.  I just need the freedom to be me.

SA: Let’s talk about the vocabulary of this play. Does your made-up language have a name like, English, Spanish, French?
CH: No, it doesn’t.

SA: Did you begin with phonetics – what the words sounded like?
CH: I did. I had every intention of making the language just gibberish, but I’m a word nerd, man, and really geeked out.  Then I thought if I’m not going to provide subtitles or translations, there has got to be some recognizable words.  You have to know the word, shimsuh.  You have to know that that’s Doug; that’s his position in the world, what they consider him, the pet. There are other words that people will recognize.

SA:  Let’s look at the personal pronouns: I, you, we, they, she, he, it. In your made-up language they translate to Esh, Tesh, Kesh, Desh, Sesh, Besh, Vesh. How did you assign the consonant at the beginning for each one of those?
CH: Desh just sounds like “they” to me. Sesh is very feminine so I assigned it to “she.” The “b” in Besh sounded very aggressive so I assigned it to “he.”  Then I kind of ran out of consonants that made sense.
People who are multi-lingual have read the play and have asked me if I studied some language that I absolutely never studied.  Or they tell me that the language is constructed just like German. Aren’t languages all pretty much constructed the same way? They all have those pronouns, for example.

SA: Maria Irene Fornes said, “We can only do what is possible for us to do. But still it is good to know what the impossible is.” What’s the impossible for you?
CH: Considering where this country is, I would say trying to convince someone who is voting for Trump to not vote for him. Some people’s minds will never change no matter how many plays you write.  I realize this when I read comments related to Trump or Black Lives Matter. You fight the good fight. You try to be rational and present a different perspective, but some people’s minds won’t be changed, period. That’s sad, but that won’t stop me from trying. 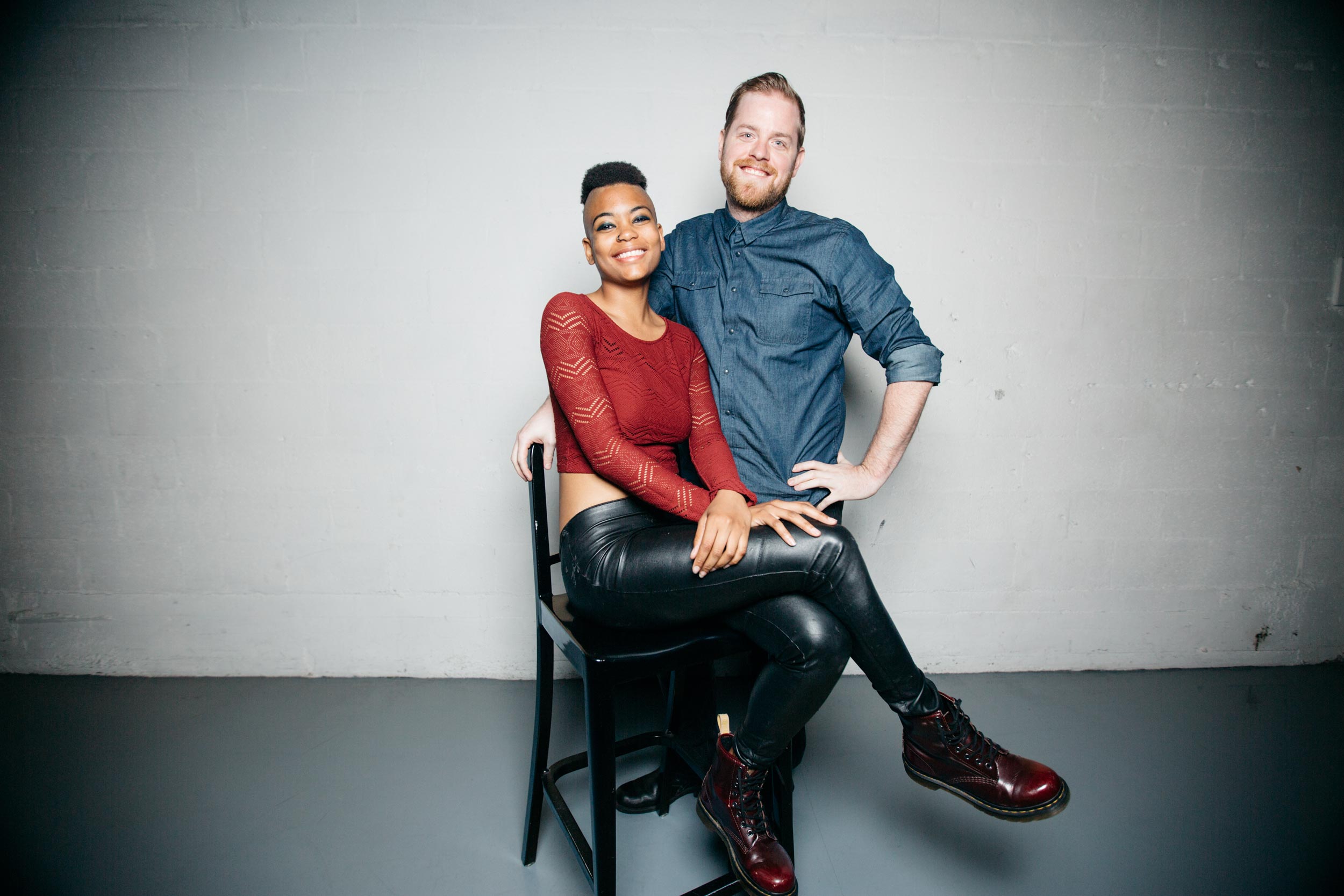 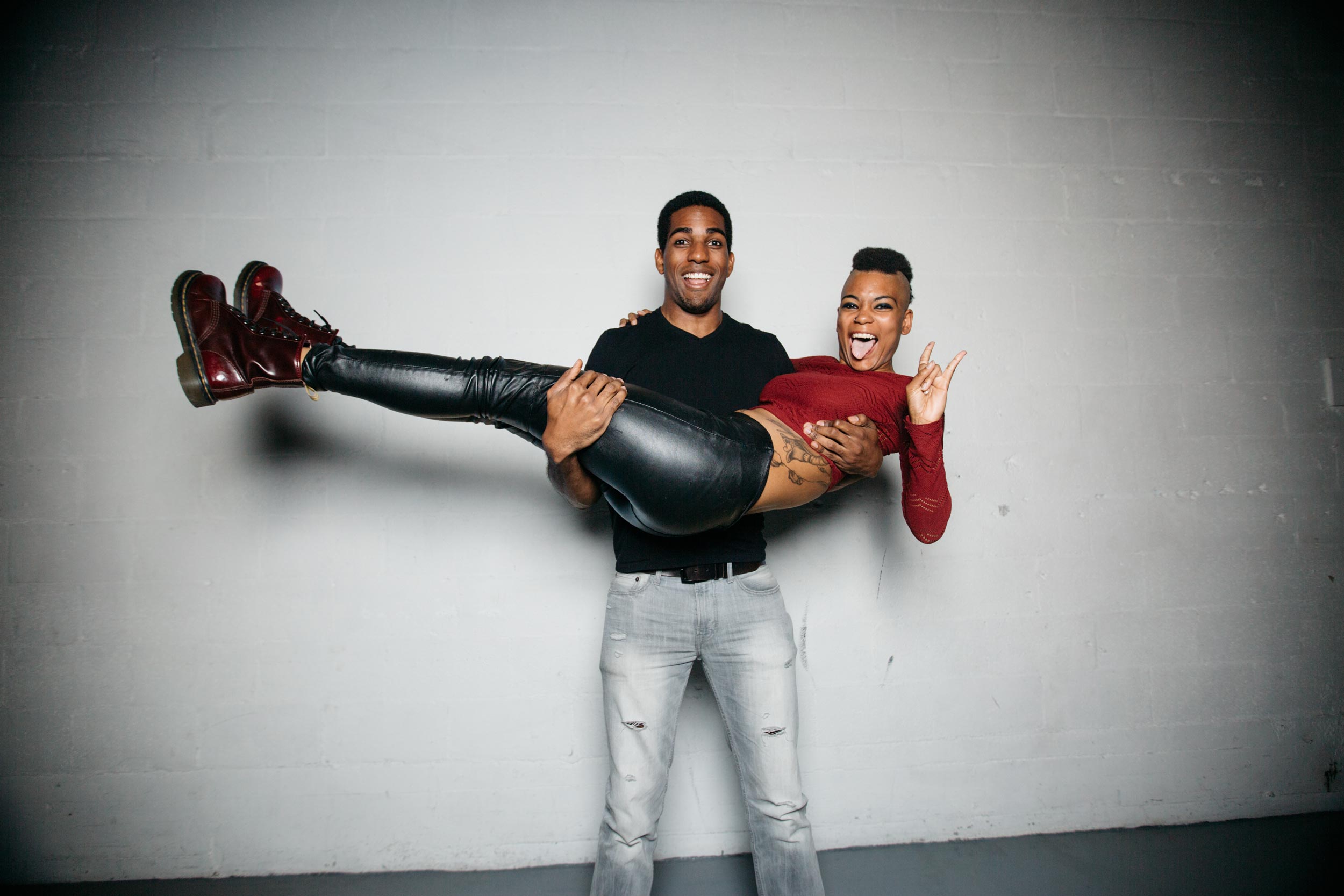 A version of this article previously appeared on CATF.org

About the Author: Sharon Anderson

Sharon J. Anderson is an award-winning creative director and writer. She is the author of When Someone Wants to Die (InterVarsity, 1988), as well as other autobiographical articles, and served as project consultant with best-selling author Melody Beattie on A Reason to Live (Tyndale, 1991). Her radio play, Two Mothers, was produced and aired on National Public Radio in July 1991. For her work, she has received more than 40 industry awards, including a New York Film Festival Award (non-broadcast) for Short Documentary featuring 9/11 First Responders, as well as three Gold Addys and two Silver Addys. In addition, in 1985 she was picked out of a Sea World audience to kiss a whale, and in 2001 was awarded Second Place in the Prince George’s County Fair Cow Chip Toss. http://www.sharonjanderson.com/