I first encountered Claire Kiechel and her play, Pilgrims, for the first time within the same week this past fall when we were both writers invited to be a part of The Lark’s Playwrights’ Week. It was a brief period of time, but Claire and her play left a lasting impression. My experience of watching Pilgrims as a staged reading that week was one of disorientation. Two people occupy the same space aboard a spaceship; one immediately believes the other isn’t supposed to be there but the other insists that they are. Have they been purposefully paired up Noah’s Ark style? Then a robot informs them a virus has been detected aboard the ship and they are being quarantined. But are they the ones being protected or are they the ones infected? Is anyone infected…or are they all infected? And it was this pervading sense of mystery (and question of who is a reliable source) that kept the play consistently engaging.

Claire, herself, strikes me as an enigmatic figure. I can’t quite find the words to describe her and, frankly, I think she’d appreciate that. I can say that, in group conversations, she can talk about any subject at length with ease. She has a knack for humorous banter and wordplay. When you look past her black, thick-rimmed glasses, there always seems to be a multitude of thoughts swirling just behind her bright eyes. But what those thoughts are (beyond the ones she volunteers), I have no idea but I’m filled with curiosity. So it was with great pleasure that I got to chat with her a bit about her play that is getting a workshop treatment as part of our inaugural Studio 45 series… 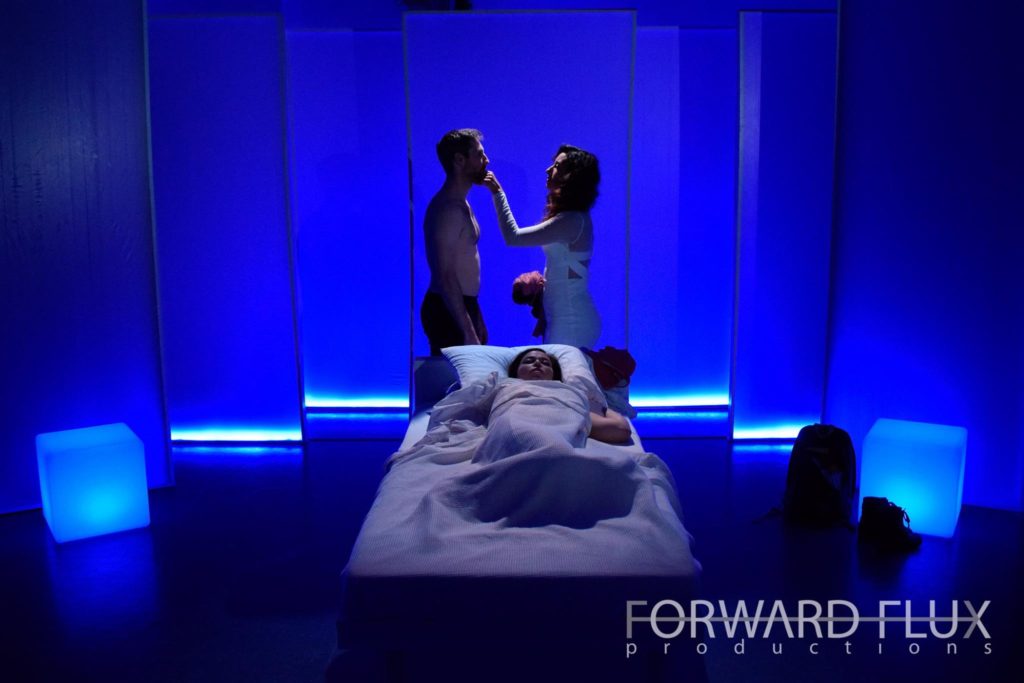 Above, the cast of Pilgrims: Ian Bond, Alaji Marie and Rachel Guyer-Mafune.

BB: Was there anything in the process of writing Pilgrims that made you think, “Wow, this is different from any of my work that preceded it”?

CK: In terms of process, I wrote the first draft when I was at the Millay Colony in Austerlitz, New York. Having a month to myself in a beautiful old barn really made for a different kind of play. I was alone with these characters every day, I dreamt of them, I woke up with them, I walked in the woods with them as spring started to melt the world. I’ve always produced better work when I seclude myself away – so I think that environment helped the writing process a lot.

In terms of the play itself, I knew I was asking big questions and that they were questions I badly needed to answer for myself. I’ve always been interested in how our personal and political desires can conflict, and I was also interested in how we read trauma in different kinds of bodies in America. What’s the difference between a veteran with PTSD and a teenage girl with it? Is there a hierarchy of trauma? What are the ways we ask people to perform their trauma? Why does it sometimes feel like a betrayal to heal oneself? Putting these questions on a spaceship and using the sci-fi genre allowed me some distance – the metaphorical remove actually helped me make it more personal rather than less.

BB: On the other hand, any similarities to previous work that you perhaps have observed as a thread that connects it to your body of work?

CK: Maggie Nelson in The Argonauts talks about the pleasure of recognizing that one might have “to undergo the same realizations, write the same notes in the margin, return to the same themes in one’s work, relearn the same emotional truths, write the same book over and over again – not because one is stupid or obstinate or incapable of change, but because such revisitations constitute a life.” Reading that reminded me of this Gerald Manley Hopkins line: “Each mortal thing does one thing and the same.” I think a human life is very short – we often only have time to explore the same few things over and over and if we are lucky, go deeper every time we return.

So yes, there are similarities in Pilgrims to much of my other work. I keep trying to ask the same question but it’s not a question I can articulate in a sentence, it’s more of a feeling or something I keep trying to grasp. I guess I keep writing plays to try to grasp it better.

BB:  Tell us a bit about yourself as a person (and a writer).

CK: I have a very hard time seeing myself as a person (or a writer) from the outside. I used to do this thing with every man or woman I dated, asking them who they thought I was. I was always so relieved if they could give me a definition! Somehow things felt truer if someone else said them, but ultimately the satisfaction would dissipate pretty quickly, and I’d be like, “But that’s not me!”

I don’t know, I think we’re so infatuated with the idea that we can sum ourselves up with a list of identities we subscribe to and groups we belong to and jobs we have, but what is really amazing is the human ability to adapt, to have multiple selves and conflicting desires all at once. The wonderful thing about being a writer is one can embrace these conflicting parts wholeheartedly.
People are sometimes surprised about the kind of plays I write. I remember after a showing of my play Some Dark Places of the Earth, this elderly man came up to me and said “But you always seemed like such a sweet nice girl.” No one is purely a sweet nice girl. In my work, I like the idea of popping that fantasy and revealing an interiority for female characters that we rarely see in public. 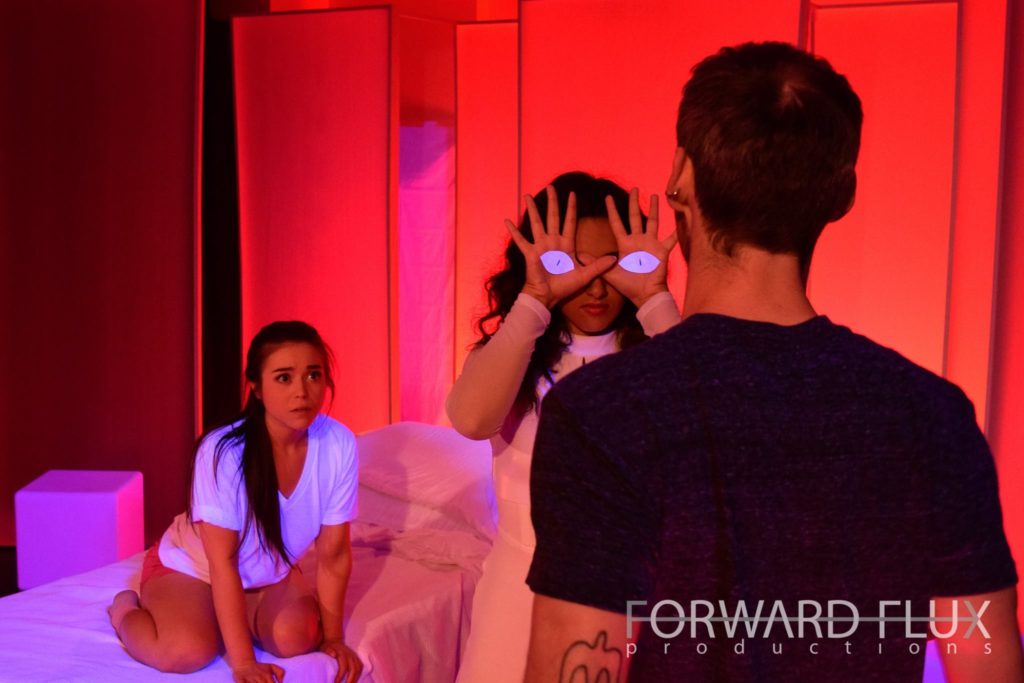 The solider has a nightmare in Pilgrims. Alaji Marie as Jasmine the robot. 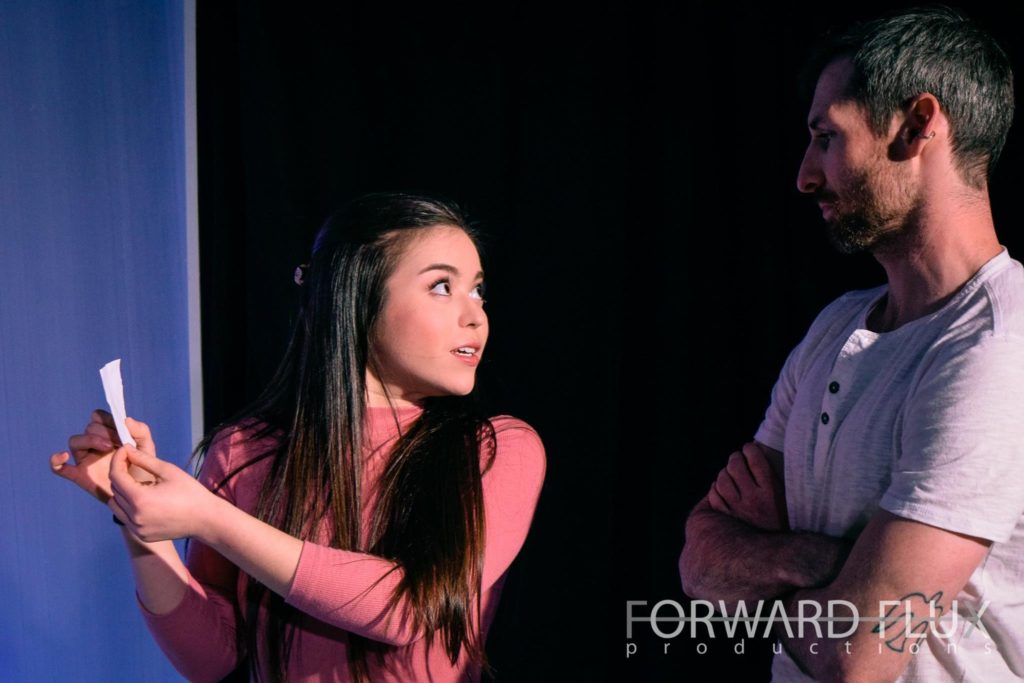 Rachel Guyer-Mafune as Girl in Pilgrims. “You’ve got the wrong room.”

BB: Now, tell us something about yourself that you might not tell unless you considered us a good friend.

CK: I asked my friend Sarah Einspanier for this answer, and she told me I should confess how I often go buy underwear at RiteAid so I don’t have to go to the laundromat. I’m really lazy in terms of the life department. Don’t tell my mother.

BB: Have you always been one for words?

BB: Do you listen to music while you write? (Even if you don’t, what’s your current jam?)

BB: Tell us about a remarkable play that you’ve seen or read recently.

CK: I recently saw and loved Dipika Guha’s Yoga Play at South Coast Rep. Yoga Play is a hilarious play that also manages to deeply investigate and question contemporary identity politics and corporate marketing. It made me think about about how we actually decide what we believe, and whether we can transcend all these identity boxes we’ve constructed to keep us safe. On the PPF Playwrights’ Panel, Dipika also said something so true but something I forget – “Every play has a thesis.” A play is never objective or neutral – a play is always an argument with a specific point of view. Yoga Play, like all good plays, has a complex thesis that tackles a question with no single answer.

BB: With NASA’s recent discovery of seven earth-sized planets that potentially could sustain life, I’ve been thinking about your play a lot lately. What was your reaction to that news story?

CK: Space colonization is still colonization. The rise of billionaires funding this search for potentially habitable planets underlines the fact that we need to spend less money searching for an escape hatch for the mighty and wealthy, and more money making sure that the habitable planet we currently live on continues to be. 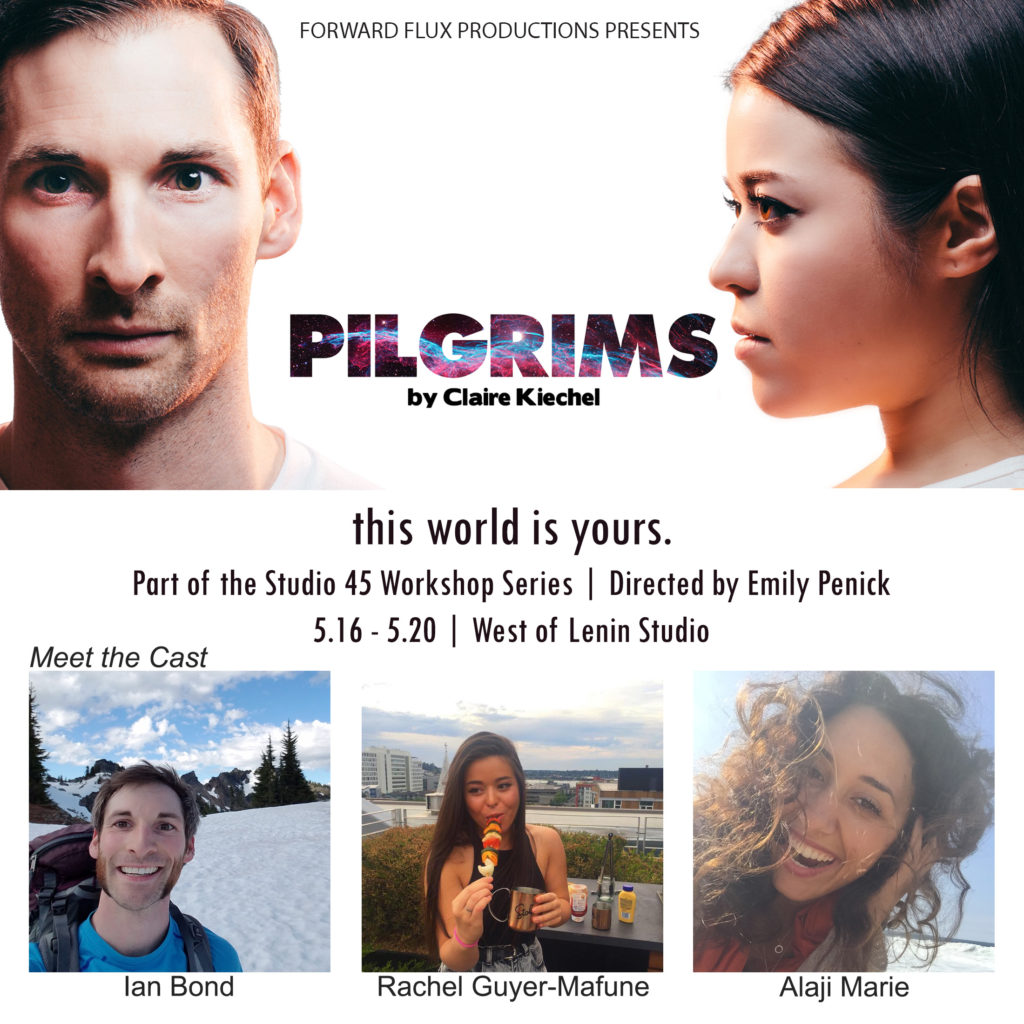 Pilgrims by Claire Kiechel will play at West of Lenin Studio, May 16-20th, 2017. Learn More or buy tickets today.

Benjamin Benne is a 2016-17 Playwrights' Center Many Voices Fellow. He is doing a one-year residency at the Playwrights' Center in Minneapolis, MN. Ben was also a finalist for the 2016 Princess Grace Playwriting Fellowship. He participated in a "Leda and the Swan" bake-off with Pulitzer Prize-winning playwright Paula Vogel as part of the Dramatists Guild Fund's Traveling Masters Program. Ben was also a participant in the New York Theatre Intensives 2011 summer conservatory (in association with EST/NY) and in the 2013 NoPassport Playwriting Intensive with OBIE Award-winning playwright Caridad Svich. His trilogy of mortality-themed plays (Terra Incognita, What / Washed Ashore / Astray, and at the very bottom of a body of water) each achieved semi-finalist status in the Eugene O'Neill Theater Center's National Playwrights Conference in consecutive years (2014, 2015, & 2016 respectively). at the very bottom of a body of water was also a 2016 Bay Area Playwrights Festival finalist and is currently in development with Umbrella Project. Terra Incognita had its world premiere (dir. Pilar O'Connell) at Annex Theatre (Summer 2016). www.benjaminbenne.com benjamin@forwardflux.com