This past June, playwright Sarah Bernstein flew to Seattle from her home in New York, where she’s been making theater since 2007 and will begin the MFA program at Hunter College this fall.  Among the highlights of her stay were exploring Capitol Hill and experiencing our summer weather: “I appreciate how people in Seattle brave the rain without umbrellas.  I think New Yorkers need to adopt this attitude.  Let’s all just get rained on.”  A little over a year after presenting Sarah’s play The Summer House at The Flux Salon, she would get to meet the team that is working on the world premiere production of her play.  “It’s not the norm for theaters to fly in playwrights from out of town to do the kind of intense, thoughtful development [Forward Flux] does.”

But Sarah and Artistic Director Wesley Frugé had already had a series of in-person and phone conversations about the play prior to the Salon presentation, after the reading, and after the play was selected for a full production.  “I think Wesley understood from the beginning what I was trying to do with this play. For a playwright, it’s really invaluable to have someone who can read your first draft and say, ‘I get what you’re doing and I think it’s important.’”

Sarah’s play investigates rape culture in America today by taking a look at three teens who are grappling with the disappearance of a female peer.  While this story will always be relevant, it feels particularly timely right now.  Co-director Haley Butler Bates remarked that,

“The workshop began just a couple days after the ‘Stanford Victim’s Letter’ was released and read over and over again nationwide. Just moments before rehearsal I remember reading the newest update on Brock Turner’s case, specifically his childhood friend’s letter claiming that she can attest that Turner is not a monster and continued to blame every other circumstance except for the rapist in why the assault happened. So going into the [workshop] weekend felt very empowering. To know that we were about to embark on a play that does not turn away from the ignorances of both men and women in how rape culture is perpetrated.”

Now, over two months later as the play nears production and Brock Turner has been released from prison having only served half his sentence, Haley asserts that “this is the time to tell this story more than ever.”

This is also the 2nd consecutive year that Forward Flux has presented the world premiere of a play (preceded by a workshop where the playwright was present) that was named an Honorable Mention on the Kilroy List.  The workshop provided time for Sarah to do rewrites while working directly with the cast; actress Tori Nelson, who plays Harley, noted that this was the first process she has been a part of where the playwright has been present.  “Working with Sarah was wonderful.  Her input allowed me to take risks and explore ideas without worrying that I was warping key elements of the story.  I am grateful that Forward Flux arranged it.”

“Workshopping with Forward Flux has really been a dream,” said Sarah.  “I wrote this play in a workshop with Francine Volpe and it has had one other reading in New York, at The New Group, but without Forward Flux, it would not be what it is. They brought it to life.”  I had the pleasure of catching up with Sarah to inquire more about her work as a playwright… 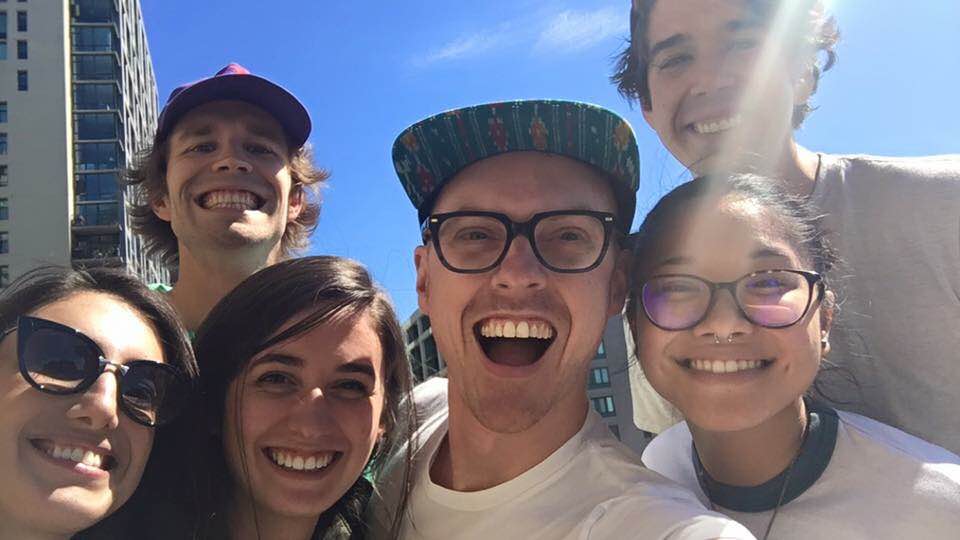 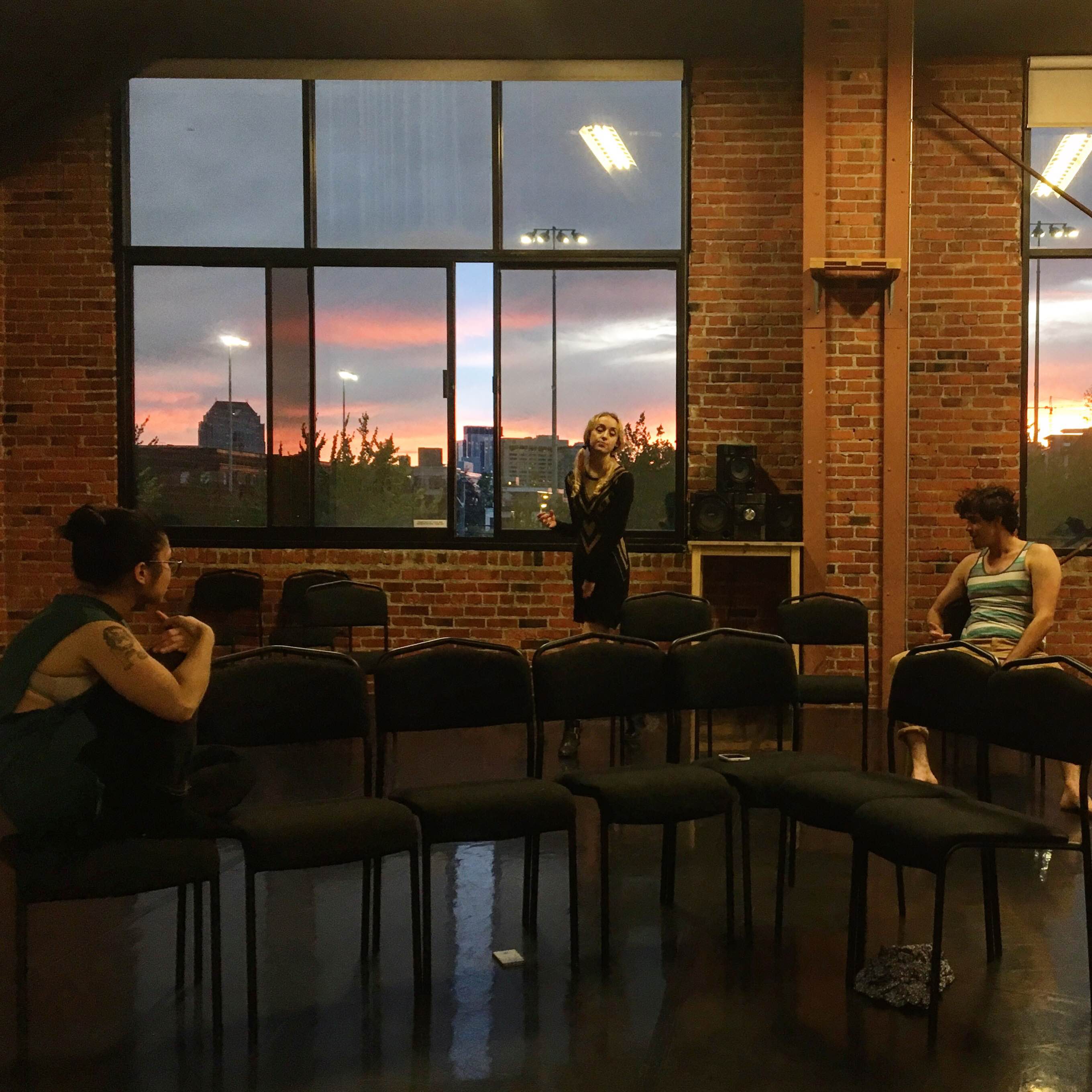 A view from rehearsal for the world premiere production of The Summer House. From L to R: Te Yelland, Tori Nelson, Cameron Hodges. 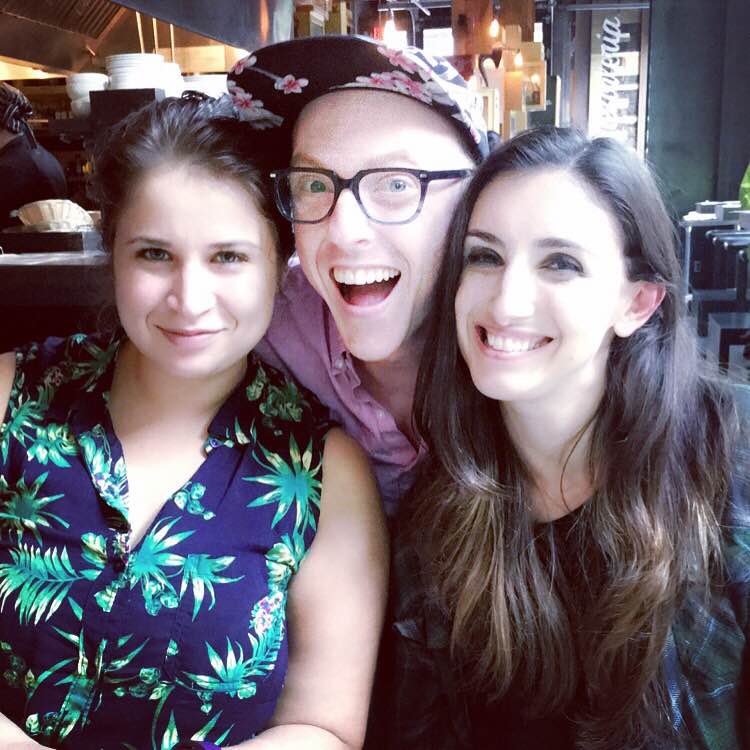 Margaritas after day one of the workshop weekend. From L to R: Pilar O’Connell (Casting Director), Wesley Frugé, Sarah Bernstein.

BB: So, first things first, why did you start writing plays and why do you keep writing them?
SB: I think I write plays because I tend to see everything in terms of emotional relationships. I see emotional relationships in places where they don’t exist – in math equations, in pieces of music, in traffic jams. I used to think I was the only weirdo who did this but there must be a lot of us because there’s a name for it – Ordinal Linguistic Personification. It’s a form of synesthesia where it’s common to assign personalities and genders to numbers, letters, or inanimate objects. I’ve been doing this since I can remember. Like a lot of kids, I grew up with a refrigerator full of colorful letter magnets, and to me it was the most convoluted soap opera imaginable. Mostly because of N. N liked to start shit.

BB: That Pesky letter N!  So have you always been one for words (and letters)?
SB: Yes. Before I could read, I used to dictate storybooks to my mom. That might sound impressive, but I should note that the plots were always lifted wholesale from Disney movies. It would be like, the entire story of Bambi but the hero was a cow. I honestly don’t think I realized it at the time.

BB: Since you described seeing everything in terms of “emotional relationships”, what relationship lead to the writing of The Summer House?
SB: Because this is, in a sense, a “coming of age” play, its three characters are very concerned with identity. When you’re young, the stakes of relationships seem higher because your world is small and your identity is unformed and so it feels like any friendship or romance has the power to completely and permanently define you. In The Summer House, you see this anxiety manifest in how the characters deal with one another, but I think that each of them finds their identity most threatened by their relationship to the character we never see: the missing girl. Each character has to define him or herself in connection or opposition to the missing girl in order to find a way forward. That was really the origin of the play. I was interested in how we either identify with or distance ourselves from people we view as victims. As I wrote, I realized it was very specifically about how we relate to young, female victims, and what that says about our society.

BB: The play has a lot of isolated, character-driven moments and powerful images; I’m thinking specifically of the hedgehog stuck in the pool drain, then the girls doing a sort of “puppet show” where they create a history of the hedgehog, Harley singing “Wonderful Tonight” alone while holding a knife.  Where did some of these moments come from?
SB: I think until you start hearing a play out loud, you don’t really know where the “moments” are. The Summer House actually originated with a different image. I had this idea of something left in a freezer. It was the same house, same group of kids, but someone had left and had left something wrapped up in the freezer. The other kids didn’t know what it was and nobody wanted to open it but they also didn’t want to just leave it behind. Somehow that play became this one.

BB: If you had to draw a line through your plays, what would you say is the connective thread in your work?—Oh, and it’s ok if the line you draw squiggles a bit!
SB: I think in all of my plays, you’ll find characters grappling with an essentially impossible situation. In every case they have some need – whether for connection or clarity or justice – that is made more urgent by their circumstances at the same time as it is rendered unobtainable by them.  I’m less interested in questions of “What is justice?” Or “What is connection?” than I am in what we do when those things are out of reach. Because that’s the human condition really. No matter how good of a lover or thinker or crusader you are, you will never get as much connection or clarity or justice as you want. So life becomes about how you deal with that shortfall.

BB: Is there some other artistic medium that you find inspires your work…or, you know, that you simply enjoy along with writing?
SB: I want to say something really surprising and confounding here, like, “each of my plays is directly inspired by a different era of trance music.” But really I think I consume other art forms pretty omnivorously, and the impact on my own work is oblique – at least to me.

BB: So what’s your current jam?
SB: Like everybody, I’m listening to a lot of Sia right now. She’s such a talented songwriter and her voice is so singularly raw. Nobody else can sing like that. But if you turn the volume all the way up, you can pretend.  Sometimes I still think that even though I lack the necessary talent and am putting no effort towards it whatsoever, I might someday become a pop star.

Learn more! Check out episode 5 of our “Live from The Flux Salon” podcast which features Sarah Bernstein and a performance from The Summer House.

Benjamin Benne is a 2016-17 Playwrights' Center Many Voices Fellow. He is doing a one-year residency at the Playwrights' Center in Minneapolis, MN. Ben was also a finalist for the 2016 Princess Grace Playwriting Fellowship. He participated in a "Leda and the Swan" bake-off with Pulitzer Prize-winning playwright Paula Vogel as part of the Dramatists Guild Fund's Traveling Masters Program. Ben was also a participant in the New York Theatre Intensives 2011 summer conservatory (in association with EST/NY) and in the 2013 NoPassport Playwriting Intensive with OBIE Award-winning playwright Caridad Svich. His trilogy of mortality-themed plays (Terra Incognita, What / Washed Ashore / Astray, and at the very bottom of a body of water) each achieved semi-finalist status in the Eugene O'Neill Theater Center's National Playwrights Conference in consecutive years (2014, 2015, & 2016 respectively). at the very bottom of a body of water was also a 2016 Bay Area Playwrights Festival finalist and is currently in development with Umbrella Project. Terra Incognita had its world premiere (dir. Pilar O'Connell) at Annex Theatre (Summer 2016). www.benjaminbenne.com benjamin@forwardflux.com
Get Tickets