Let’s go to the Double Feature…

As the Producing Artistic Director of Forward Flux, one of the questions I am often asked is, “Why present two plays at one time?” Part of the answer is that I’m crazy, and why produce one show when you can produce two? The other part, and what I’d like to spend a little time talking about today, is that the two plays complement each other when viewed together.

Forward Flux is currently presenting the world premiere of THE SUMMER HOUSE by Sarah Bernstein (after a year and a half of development working closely with the playwright), and the west coast premiere of THE WEDDING GIFT by Chisa Hutchinson. The plays are showing double feature style, so you can choose just one, or see both in one evening with show times at 7pm and 9pm. Each of these plays are short (70mins for Summer House / 80mins for Wedding Gift) with no intermission, and each offers a starkly different look at modern topics. BUY TICKETS HERE 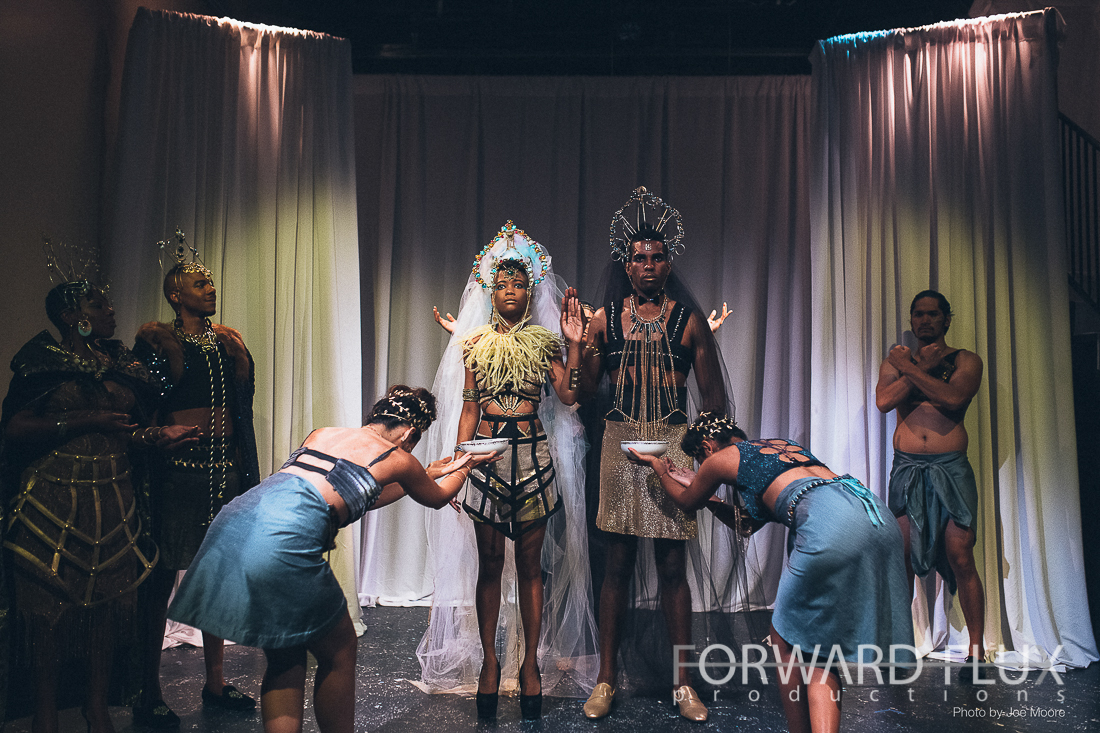 THE WEDDING GIFT by Chisa Hutchinson

In THE WEDDING GIFT, we are offered a re-imagination of the slavery narrative by Chisa Hutchinson. Chisa is surely one of the most important voices on the American stage and I can’t wait for more people to see her work. The play is set “so far in the future it’s stupid,” and we open on a wedding of an alien princess named Nahlis. She is gifted a naked white man (Doug) as her sex slave, and what follows is a royal soap opera filled with drama and comedy. The play hurls forward, barely allowing time to process the story (especially in our production without an intermission between acts) and ends with a sudden, startling revelation. Chisa has invented an alien language that most of the play is spoken in, which truly puts the audience in the slave’s shoes as he navigates this strange land and tries to escape and return to his daughter. It’s an exploration of otherness, and offers actors of color a chance to play archetypes and roles that are outside of the standard race narratives normally being presented on stages across the country (all roles in the play except for Doug are portrayed by people of color). 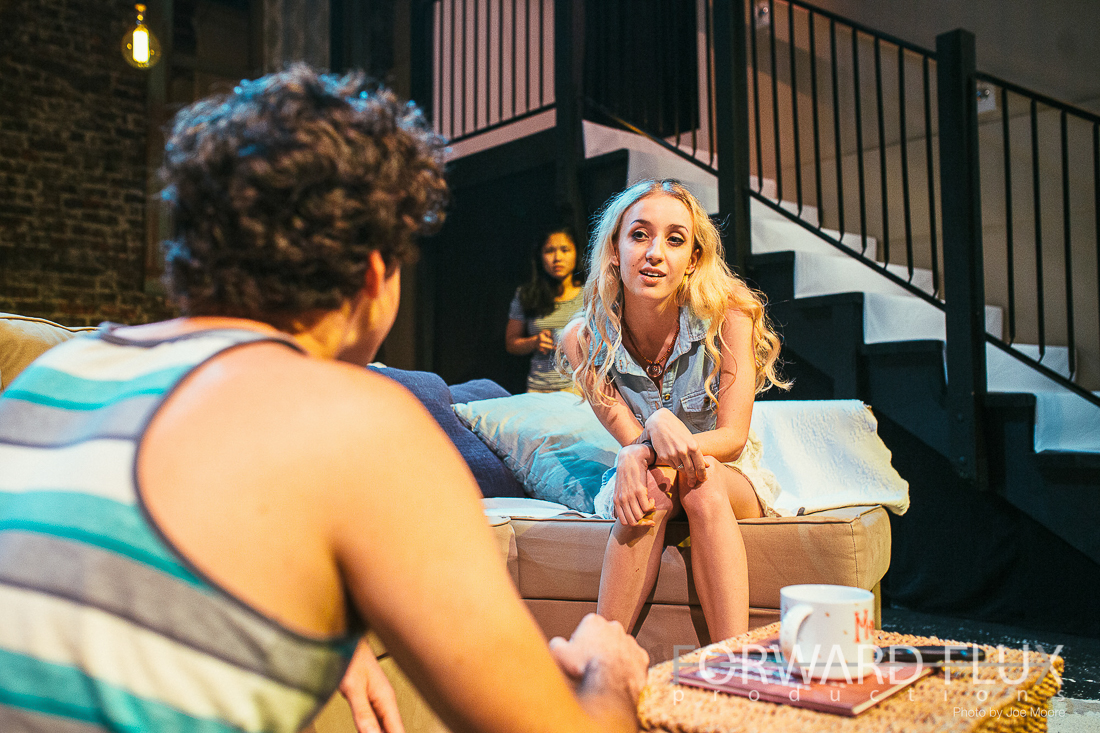 THE SUMMER HOUSE by Sarah Bernstein

In THE SUMMER HOUSE, Sarah Bernstein offers up a chilling investigation of rape culture in teen America. It is set in modern times, and features three teens spending their last day and night of summer vacation together, while grappling with the disappearance of a local girl. What happened to the girl, and how should the three friends spend their final night in the light of such dire news? The play moves along slowly, almost in real time as the characters interact with each other, gossip, and attempt to drink away their guilt. It’s the type of play that sneaks up on you. At first it seems as if it’s just people sitting around talking about nothing, and then you begin to understand the chilling nature of their specifically chosen subjects. “A girl in my school went crazy,” says Harley, as she sits on the couch with anxious Dylan. So many girls went crazy, it turns out, though neither Dylan or Harley spend any time talking about the underlying reasons why. “I guess she just couldn’t take it,” says Harley with a sneer. These three characters are all operating inside of rape culture, and it has effected them in different ways and each of them has some responsibility in the weekend’s events, though perhaps none as much as Gil. He is a country club rich kid, born with a silver spoon in his mouth and sees himself as the ultimate good guy. 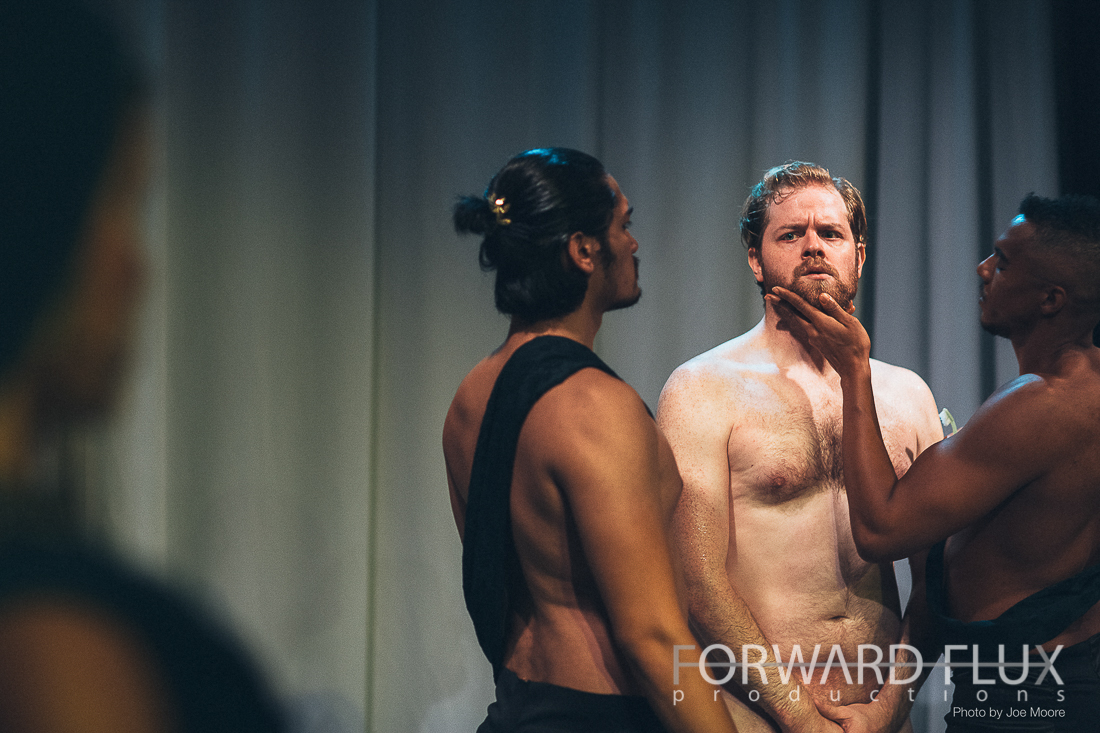 THE WEDDING GIFT by Chisa Hutchinson 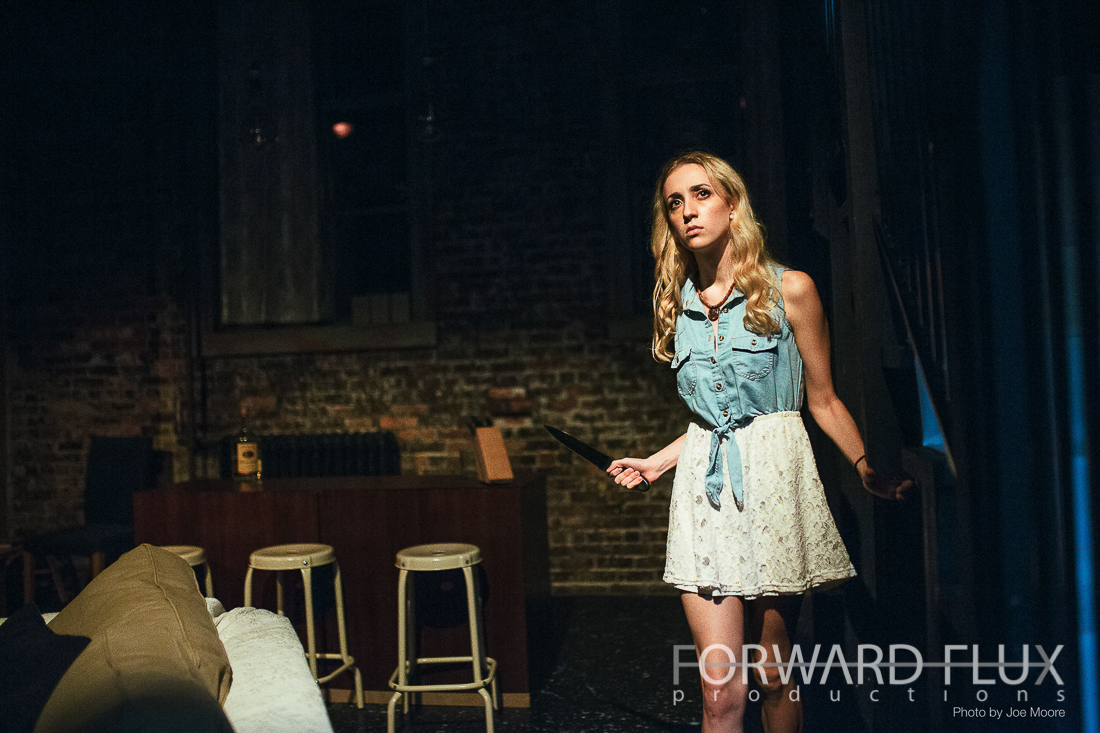 THE SUMMER HOUSE by Sarah Bernstein

Now how do these two plays fit together and elevate each other when seen as a double feature? For one, I enjoy the extreme opposite of tone / setting / pace. We move from an alien planet far in the future to right now, today, in a summer house on the beach. One is over the top with high drama and physical comedy (THE WEDDING GIFT) and the other takes its’ time to slowly build stakes and ends in bright flash of energy (THE SUMMER HOUSE). Additionally, I think both plays offer interesting perspectives on extreme privilege. In THE WEDDING GIFT, Doug is stripped of all privilege, not even allowed clothes and literally put in chains. A white man in a foreign land filled with black and brown skinned aliens, he suddenly finds himself as the “other.” While in THE SUMMER HOUSE, our white leading male, Gil, enters the stage at the top of the play with extreme privilege and leaves the stage at the end of the play in the exact same place that he began. He is able to leave the summer absolved of his involvement in his girlfriends’ disappearance, and will be just fine as he enters his sophomore year at college, though his girlfriend will likely never be heard from or seen again.

Both plays feature strong female leads. Nahlis will be the ruler of her land one day as she lives at the top of a leadership chain in a matriarchal society. Harley in THE SUMMER HOUSE has a very unclear future. She is the quintessential mean girl, though we begin to see some truth behind her many lies and ultimately leave the play with a greater understanding of who she is and why she lashes out in the ways she does.

Both plays are also complicated puzzles that require the audience to be active participants in exploring what they are about and what is happening in the stories. In THE WEDDING GIFT, the audience must decipher a brand new language which was invented for the play. Approximately 60% of the play is spoken in this foreign tongue with no subtitles, so you truly have to piece the story together by watching the actors faces and movements. In THE SUMMER HOUSE, the text almost never tells you exactly what is happening on the stage. The heart of the play lies in the subtext, and in (like THE WEDDING GIFT) the action. There are so many lies in THE SUMMER HOUSE, that what the characters DO is much more important than what they SAY.

THE WEDDING GIFT and THE SUMMER HOUSE show through October 8th at Gay City Arts. Take in a double feature and let me know (below or on Facebook or Twitter) what you thought about the two plays together. Both are incredible and can stand on their own as stellar pieces of modern theatre, yet when viewed together the evening is elevated. Questions and thoughts about privilege, otherness and gender roles are heightened by seeing these two vastly different perspectives on modern themes back to back.

About the Author: Wesley Frugé