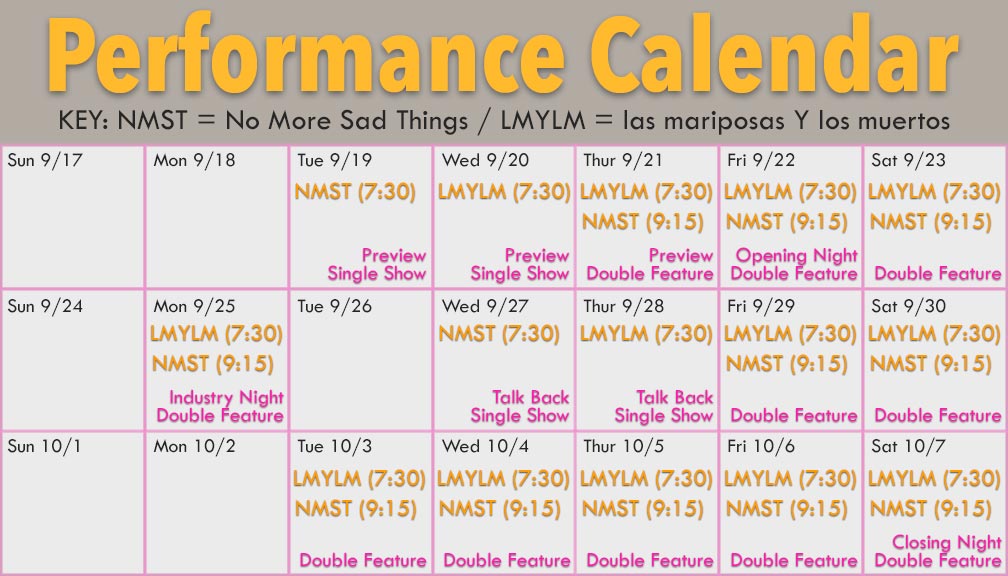 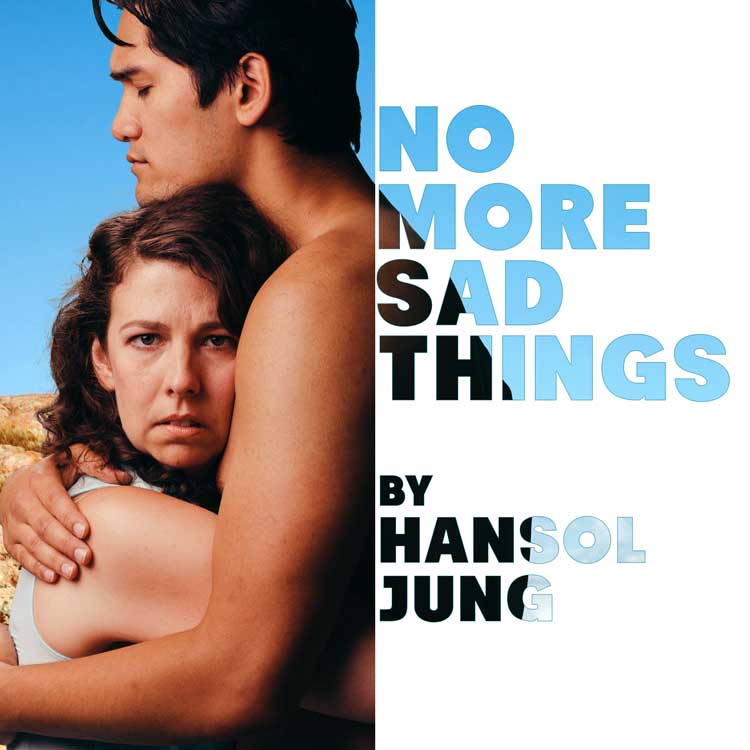 About the play: A woman catches a last-minute flight to Maui to escape the woes of her mainland life. She meets a boy on the shores of Ka’anapali, and something strange and familiar draws them to each other. Their encounter sets in motion a magical journey through the past and present as she attempts to avoid the sad things in her life. They spend the week together and are forever changed. The woman is 32. The boy is not.

The cast features Kiki Abba, Lance Valdez and Nabilah Ahmed. It is directed by Wesley Frugé and features original music by Hansol Jung and Jongbin Jung.

The play runs approximately 75mins with no intermission. 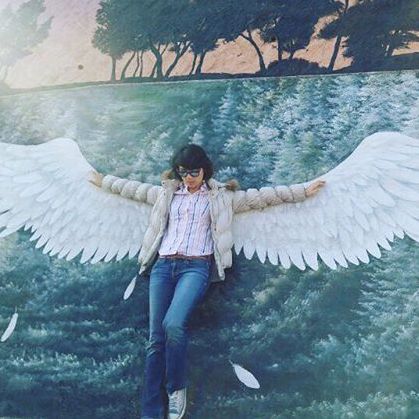 Cast of No More Sad Things 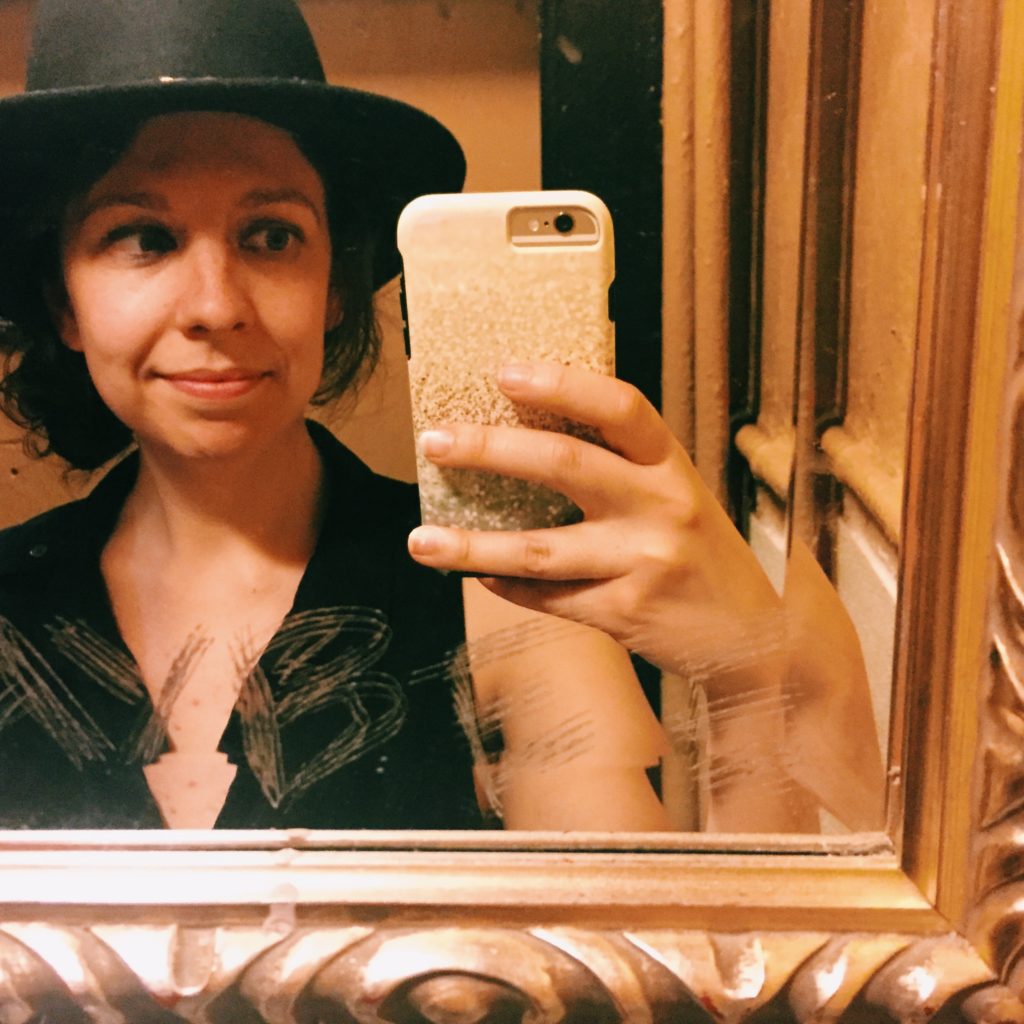 Bio
Originally from Iowa, Kiki has been in Seattle for nine years working as an actor, teaching artist, director, producer, and marketer for the arts. Recent credits include Scary Mary and the Nightmares Nine (Annex Theatre), IRL: Craigslist (Horse in Motion), Scab (Many Hats Theatre), Girl (Annex Theatre), and Belleville (MAP Theatre). She is also a Producer for Forward Flux Productions and an Associate Artist with Parley. Other credits include work at Seattle Rep, Seattle Children’s Theatre, and Village Theatre. She was recently recognized as the People’s Choice Award Winner for Outstanding Actress for the 2016 Gregory Awards.
Close 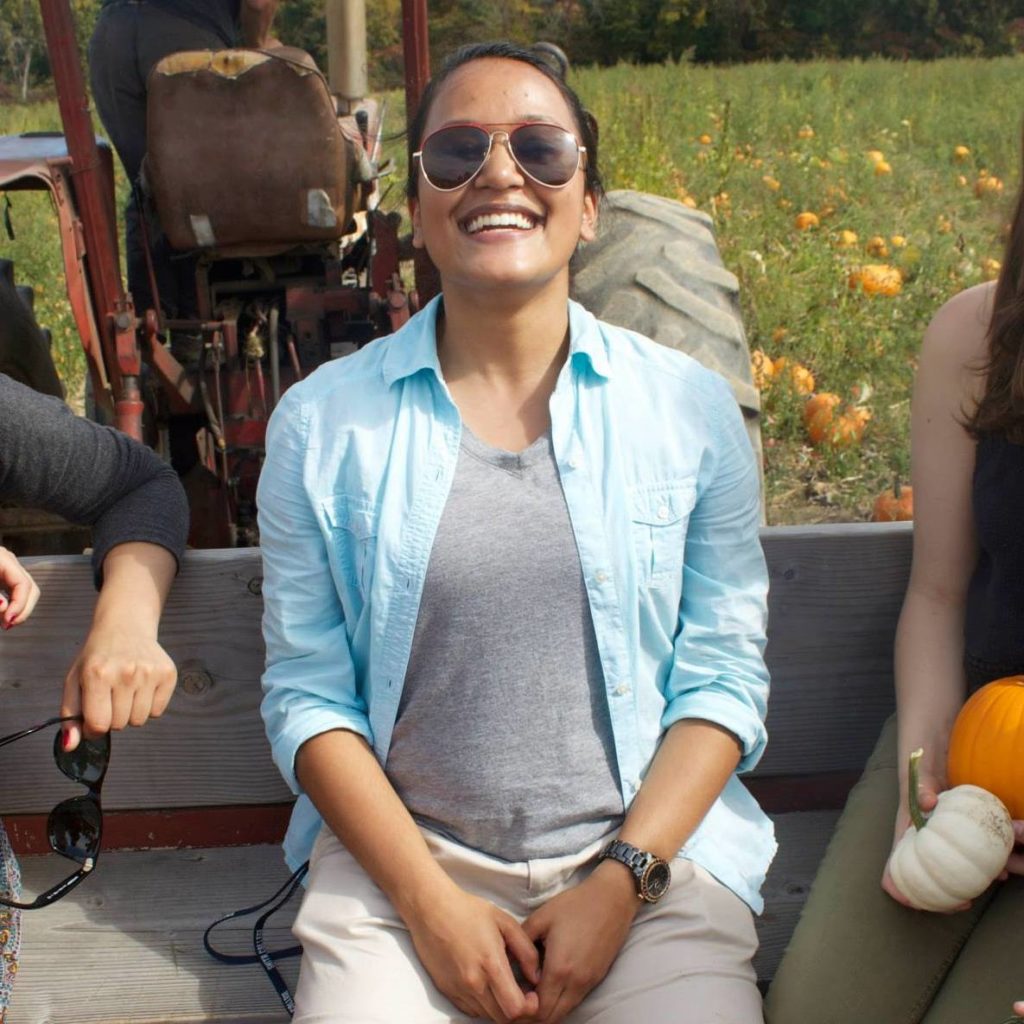 Bio
Nabilah has been living and working in Seattle for a year. Her stage credits include Waning and ACME at Annex Theater, along with Forward Flux’s The Flux Salon reading of A Small History of Amal by Amal, Age 7 (as Amal). Though now an actress, music was her first foray into the performing arts; she played the violin for nearly a decade, picked up the ukulele six years ago, and has been singing for much longer. She continues to enjoy experimenting with instruments.
Close 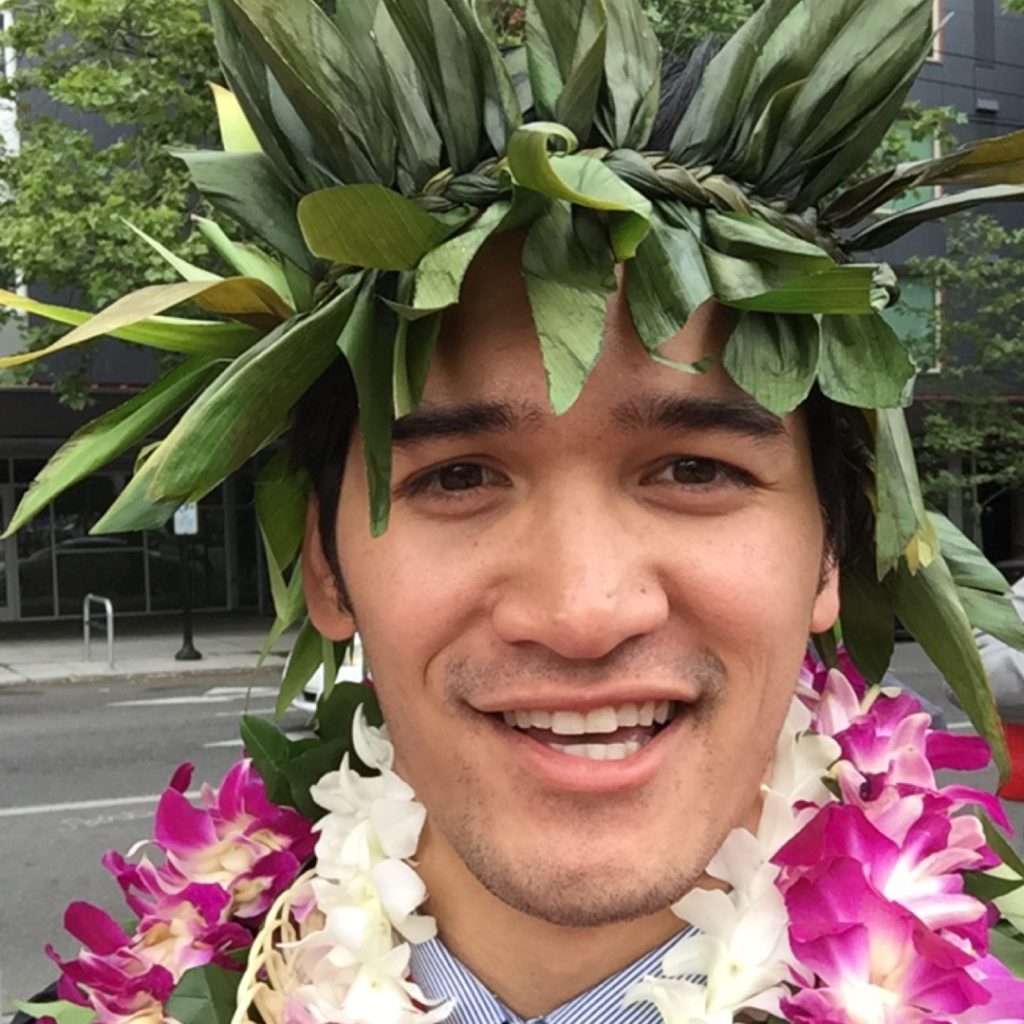 Bio
Born and raised on Maui, Lance is excited to share this beautiful story that takes place in his homeland as Kahekili. This is Lance’s second appearance with Forward Flux, he was last seen as The Guard in Chisa Hutchinson’s The Wedding Gift. He recently received his BA in Theatre at Seattle Pacific University where some of his favorite performances included The Tour Manager in Elephant’s Graveyard, and John Logan’s RED, which he co-produced and starred in as Ken. He also appeared in Bainbridge Performing Art’s Production of Big Fish: The Musical as Don Price.
Close

Wesley is the Founder + Producing Artistic Director of Forward Flux Productions. Currently with Forward Flux, he is directing No More Sad Things and producing the world premiere of las mariposas Y los muertos. Previously with Forward Flux, he directed and/or produced The Wedding Gift (Seattle), The Summer House (Seattle), FriendAndy.com (NYC), Still Life (Seattle), Green Whales (Seattle), Pilgrims (Seattle), and Robot Songs (NYC). He conceived and directed The Flux Salon series bringing readings of new plays to intimate spaces throughout Seattle (20 Salons held to date); and conceived and directed 8 cycles of collaborate create, a 21-day artist residency series. Elsewhere, he is Creative Advisor for The Grief Dialogues, a theatrical movement to start a national conversation about death and dying. With The Grief Dialogues, he directed Out of Time at Bainbridge Performing Arts Center, and the world premiere of The Grief Dialogues play at University of Washington. He has also directed for 14/48 – the World’s Quickest Theater Festival, assistant directed Silence at Stages Repertory in Houston, and worked as a teaching artist for the Alley Theatre. Wesley has performed on stages across the country, select credits include West Side Story (Little Theater on the Square), Guys and Dolls (Prather Entertainment Group), A Christmas Carol (National Tour), and Neither Heaven Nor Earth (Off Broadway). BFA Musical Theatre, Sam Houston State University.

Jakob Liljenwall grew up in Santa Fe, New Mexico where he learned to play the piano and guitar, and got his first ensemble experience in a Shona-style marimba group. He then moved to Vancouver, BC where he studied electroacoustic music and acoustic ecology, and played in the short-lived experimental pop outfit Line Divide/Danger Bay. He has contributed sound designs to Newsworthy (2011) and Dystopian Free Fall Blues (2017) by Vancouver contemporary choreographer Jennifer Aoki.

Zanna is beyond thrilled to be creating with Forward Flux Productions yet again; previous designs include Pilgrims, The Summer House, The Wedding Gift, Green Whales and Still Life. has spent the previous 12 years lighting stages across the country and is particularly proud of her efforts in lighting original plays and musicals. Much of her free time is spent experimenting with lighting in photography and moving pictures as a way to stimulate emotion. Zanna also enjoys volunteering her skills for companies such as Equity against Aids (Broadway across America), Phillips Lighting, and local educational centers.

Erin is stoked to be Forward Flux’s sound designer for their 2017 season. Having cut her teeth with FF on Pilgrims earlier this year, Erin is happy to get to know this company and its place in the Seattle community. Originally from Minnesota, Erin has been collaborating, making, and telling stories theatrically in Seattle for the last 9 years. She is co-founder of Umbrella Project, company member with LiveGirls! and Annex Theatres, and assistant to the resident sound designer at Intiman and Seattle Repertory Theaters. Next, catch her designs in Intiman + Sara Porkolab’s DRAGONLADY, as well as her work with Ballard High School’s Metamorphoses directed by Chelsea DuVall.

Jordan is a scenic and sound designer. She has worked with Forward Flux in various roles on all their full productions in Seattle. Most recently she designed the set for Pilgrims. She recently graduated from Seattle Pacific University with a degree in Theatre production. Jordan is currently pursuing an MFA in Scenic Design at Illinois State University. Recent works can be seen on jordangerow.com and current project updates on Instagram, @jordangerowdesign. Thanks to all the people!

Originally from Southern California, Haley has found a home here in Seattle. In 2016, she received her BFA in Theatre (Emphasis in Original Works) from Cornish College of the Arts. This last year she joined Forward Flux Productions as an Associate for their 2017 season. Previous credits with Forward Flux include co-directing the recent world premiere of Sarah Bernstein’s The Summer House, assistant directing Claire Kiechel’s Pilgrims, and Lia Romeo’s Green Whales.